Dutch princess returns to Ottawa, where she was born during Second World War

Princess Margriet of the Netherlands is visiting Ottawa, the city where she was born during the Second World War.

The princess was born at the Ottawa Civic Hospital after the Dutch royal family fled to Canada to escape Nazi occupying forces in 1940.

On Thursday, the princess planted tulips at Stornoway, the house where she and her family lived when she was a child and which is now the residence of the leader of the Opposition.

The official visit, which will run until Monday, was originally planned for 2020 to commemorate the 75th anniversary of the liberation of the Netherlands.

She is set to meet the prime minister, Governor General and MPs and speak with Canadian veterans who helped liberate the Netherlands from the Nazis.

The princess is also planning to visit the Canadian Tulip Festival.

Tulips are considered a symbol of friendship between the Netherlands and Canada. Princess Margriet’s mother, Princess Juliana, sent 100,000 tulip bulbs to Canada in gratitude for its help liberating her homeland from German forces.

More than 7,600 Canadians died while helping to free the Netherlands in 1944−1945. The Dutch royal family has continued to send thousands of tulip bulbs annually to Canada as a gift of thanks. 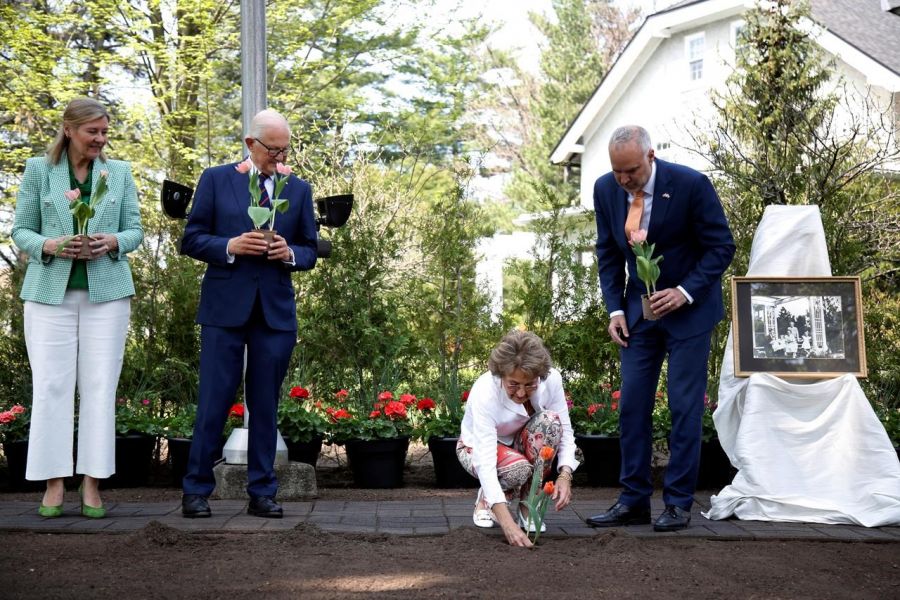 Princess Margriet met Liberal and Conservative MPs on Parliament’s Canada−Netherlands friendship group on Thursday at the Ottawa residence of the Netherlands’ ambassador.

Brad Vis, chair of the group, said the princess stressed her affection for Canada, the country of her birth, at the meeting.

"We had a wonderful discussion about Canada−Dutch relationships and Canadian and Dutch culture," the Conservative MP said. "The Dutch princess has a special place in Canada given that she was born in Ottawa in the Second World War."

Vis, whose grandparents emigrated from the Netherlands to British Columbia to farm after the Second World War, said his elderly grandmother was terribly excited to hear he was meeting the Dutch princess.

"When I told her, she said she couldn’t believe I was meeting her," the MP said. "My 94−year−old grandmother could still remember the princess being born in Canada."

Princess Margriet was born at the Civic Hospital in Ottawa in January 1943, the third daughter of Princess Juliana and Prince Bernhard.

She was baptized in St Andrew’s Church in Ottawa in June 1943.

After the Netherlands was liberated in August 1945, Princess Margriet returned to the country to take up residence with her family in the royal palace in Baarn.

Anita Vandenveld, Liberal MP for Ottawa West−Nepean, whose parents were from the Netherlands and who met the princess on Thursday, said she has "inspired the hearts of Canadians and especially Ottawans" since "the day she was born."

My own family was liberated by Canadian soldiers during the Second World War," Vandenveld said in an email.

"As the tulips bloom in Ottawa, we could feel the warmth and friendship and special relationship that Princess Margriet shares with Canada and with Canadians, a feeling which is enthusiastically returned by members of the parliamentary Dutch caucus and the over one million Canadians of Dutch heritage."