Ontario is extending a stay−at−home order, limiting interprovincial travel and shutting outdoor recreational facilities while giving police new powers to enforce the restrictions amid an onslaught of COVID−19.

In stretching the current four−week stay−at−home order to six weeks, Premier Doug Ford said on Friday the province was on its heels and tougher measures were needed.

"We’re losing the battle between the variants and vaccines," Ford said. "The reality is there are few options left."

Other measures include restricting outdoor gatherings to members of the same household — people who live alone can join another household — and closing recreational facilities such as sports fields, playgrounds and golf courses.

In addition, essential retailers will have to further lower capacity limits to 25%, indoor religious services will be limited to 10 people, and non−essential construction will have to shut down.

To enforce the measures, police and bylaw officers will now be able to stop motorists and pedestrians to ask them where they live and why they’re not at home.

Solicitor General Sylvia Jones said the temporary enhancement of police powers was needed to stop the spread of COVID−19.

"This is a critical moment in Ontario’s response to this deadly virus," Jones said.

Granting police the authority to stop and question anyone at random risks a "rash of racial profiling," the group warned.

"Random police stops during COVID are unconstitutional, presuming those outdoors or driving to be guilty," said Michael Bryant, head of the CCLA.

Starting Monday, checkpoints will be set up at the border with Quebec and Manitoba to prohibit non−essential entry. People crossing for work or transporting goods, among others, will be allowed in.

The new measures came just hours after Ontario’s science advisers warned that the province’s COVID−19 infections could soar past 15,000 cases per day by June without toucher restrictions.

The dire predictions came after the government pleaded with other provinces to send in nurses and health workers as its hospital system was pushed to the brink.

"Our progress is both frustrating and frightening," Dr. Adalsteinn Brown, co−chair of Ontario’s science advisory panel, said in presenting the latest projections. 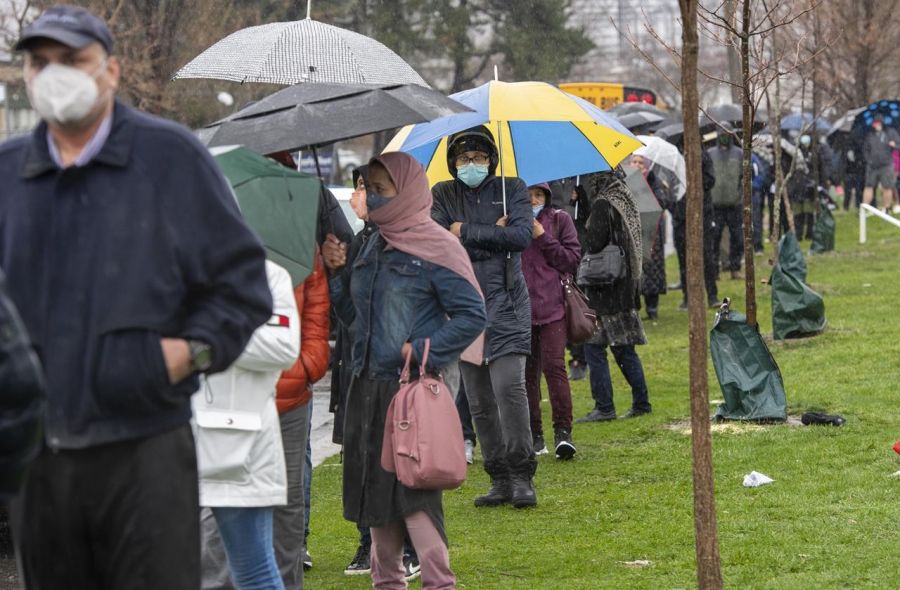 Ontario reported 4,812 new cases — another record — on Friday, up from Thursday’s record of 4,736. It also reported 25 more deaths related to the virus.

Hospitals were "bursting at the seams" and care was already being compromised, Brown said as his group urged Ford to order everyone to stay home for six weeks, and ramp up vaccinations as the only way to gain some control of the pandemic.

Vaccines were not reaching high−risk people fast enough to stem the surge in hospital and ICU admissions, Brown said. People at lowest risk were still receiving more vaccines than those at highest risk, he said.

"That is a difference that needs to be closed," Brown said, noting the province would see "a very, very big return" in prevented cases if shots were allocated to high−risk communities.

In a letter to all provinces and territories sent Friday morning, Ontario’s Deputy Health Minister Helen Angus said the province was short thousands of nurses and asked whether they had any to spare. The pandemic, Angus said, had strained hospital capacity in southern Ontario, particularly intensive care.

Ontario was expected to be short 4,145 nurses in the hospital sector alone over the next four months, Angus said, while asking her counterparts for 620 health professionals, including nurses and respiratory therapists.

"We are projecting a need for this critical support for four months following the anticipated peak of the third wave," Angus wrote.

Alberta, however, declined, saying it was strapped itself, while the premiers of Newfoundland and Labrador and Nova Scotia indicated they were unwilling to share vaccines but were open to giving medical assistance if they could.

The Canadian Red Cross was on standby for deployment of mobile vaccination teams in areas with highest need in Ontario, the prime minister said, but Ford’s office said the offer was appreciated but ultimately of little use given the shortage of vaccines.

Ford took shots at the federal government over the vaccine supply and what he said were lax international border controls for the surge in coronavirus variants now plaguing Canada.