Muireans is a trans woman living in Penticton. She says she has "struggles day to day feeling safe," and that she's been physically harassed just for being transgender.

And last night Muireans, along with several dozen other concerned folk, joined forces for the 2019 edition of Take Back the Night. 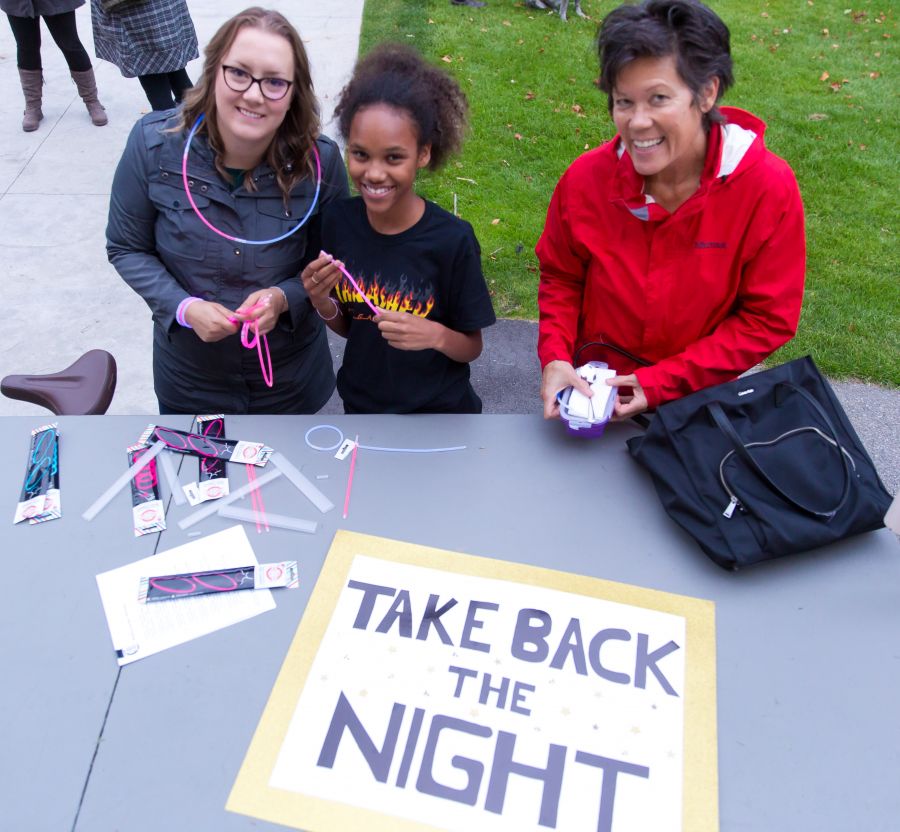 The gathering and march, beginning at 6:30 p.m. at the Gyro Park bandshell with sign-making and ending a bit after 8, had one overriding message - that everyone has a right to feel safe. And Muireans, who participated in the past, felt the need to do so again. 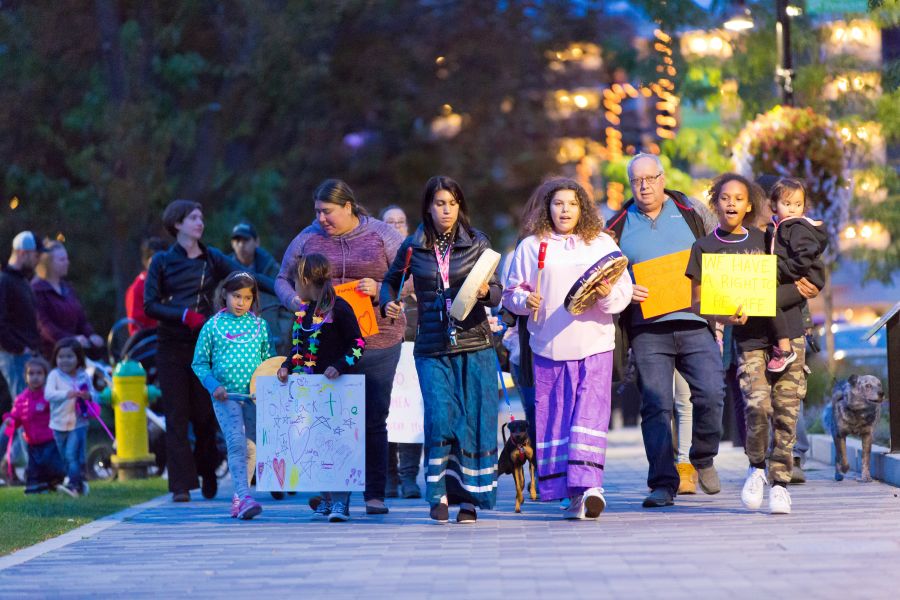 "The world isn't a safe place for a lot of people, particularly indigenous women. And personally as a trans woman, I just wanted to be out here tonight to show folks that everyone deserves to live in safety and live their lives with dignity."

Debbie Scarborough, executive director of one of the event's partners, the South Okanagan Women in Need Society, spoke for the group. 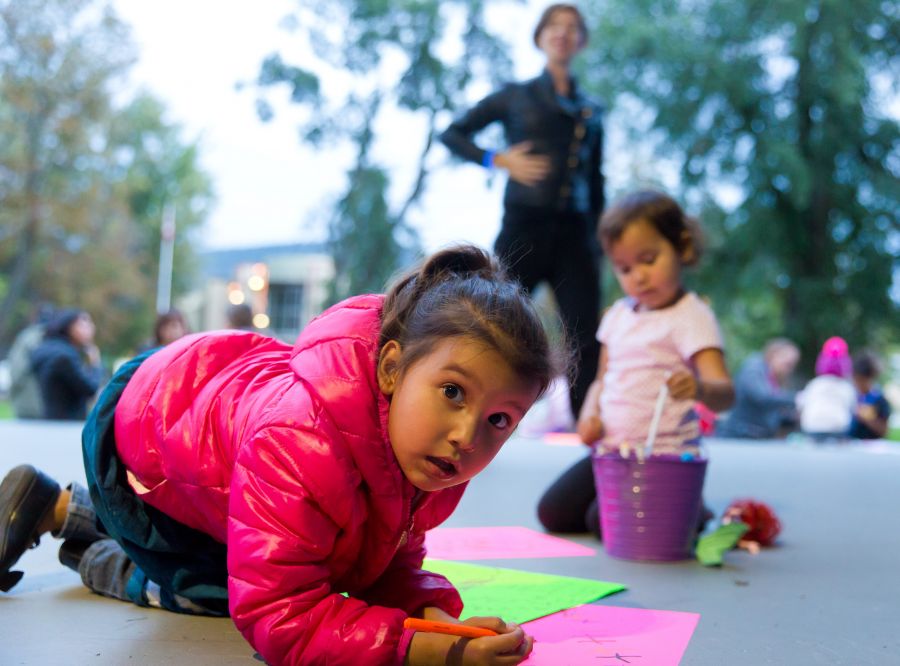 "Take Back the Night is one of the nights every year where we march together to say we have the right to walk on the street and feel safe. So we're going to take back the night."

"Maybe one day men will walk and give back the night, but for now it's take back the night. Over 30 countries around the world do a Take Back the Night event." 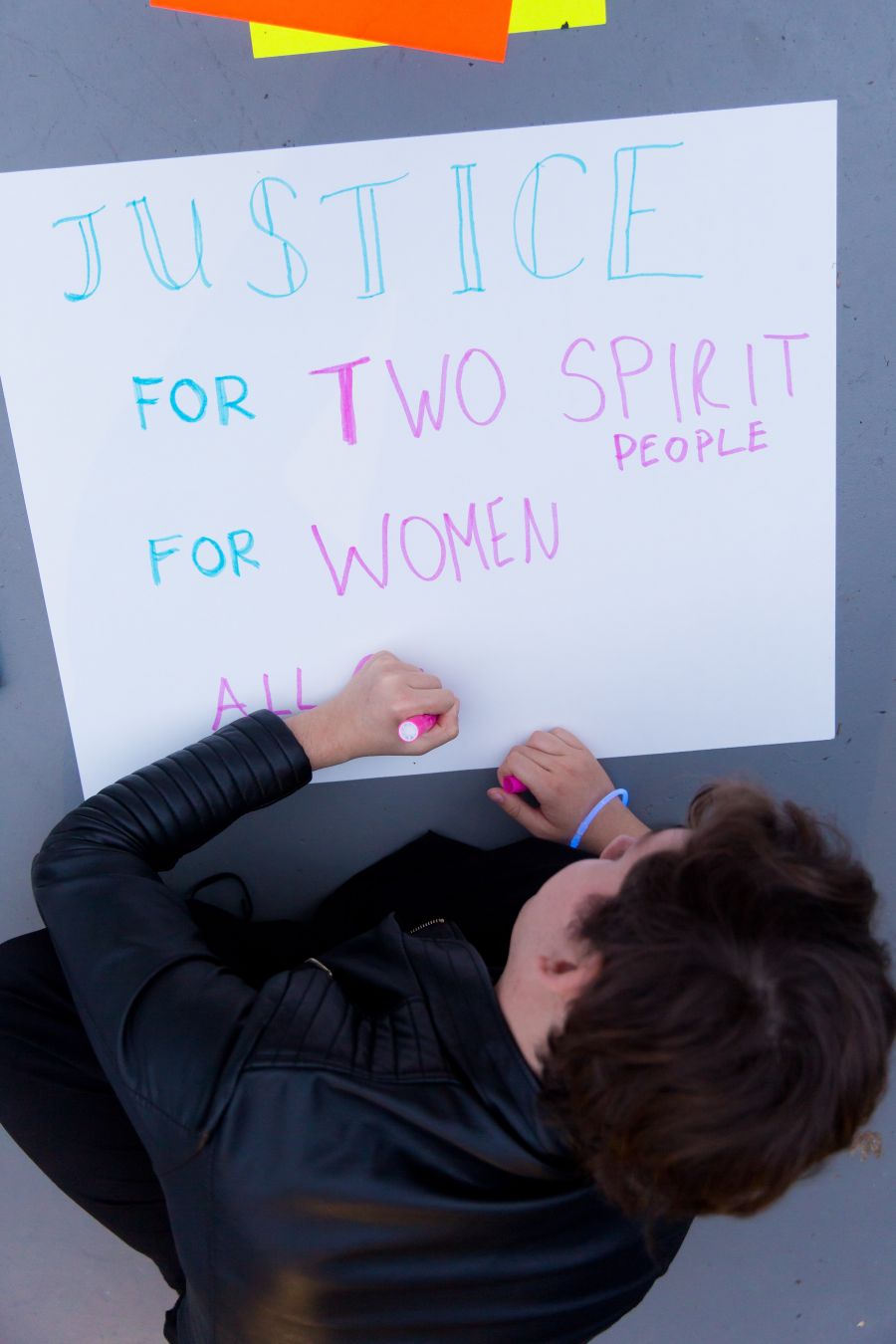 The turnout wasn’t quite as large as it's been in the past, but, said Scarborough, "We don’t count heads and we're never disappointed. And the people that are here have come with the right philosophy and the right desire to come together for change."

"But if you weren't able to come," she added, "we ask that you please give it some thought. Think of all the murdered and missing women. Make sure you never commit an act of abuse, never condone an act of abuse, and that you speak loud and clear about it." Another one of the event's partners was the Okanagan Nation Transition Emergency House (ONTEH). And last night Cricket Testawich, social development manager with the Penticton Indian Band, was its chief envoy.

"I'm here representing ONTEH, but I'm also representing my family and my daughter because she has a right to be safe as she grows up. She's come to this walk since she was in a stroller, and she now knows what it's all about and why she's here. She and all women deserve safety." 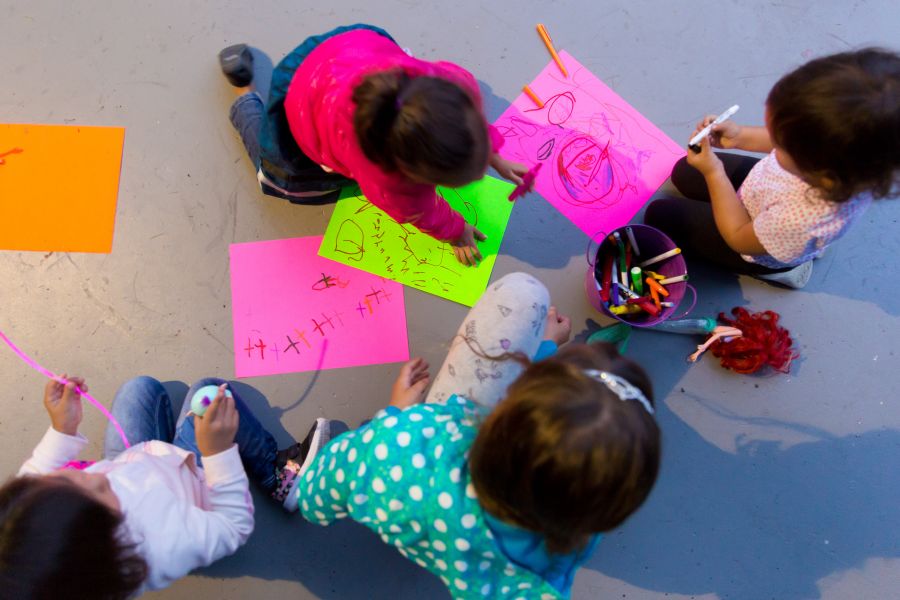 "Events like this raise awareness that all people deserve safety."

And, said Testawich, there'll be a similar event, backed by the Penticton Indian Band, in just a couple weeks time. "It's the Sisters in Spirit Walk and it happens on Friday, October the 4th here at Gyro Park. It’s an awareness walk for missing and murdered Indigenous women. We'll walk, then we'll come back her to Gyro for lunch." 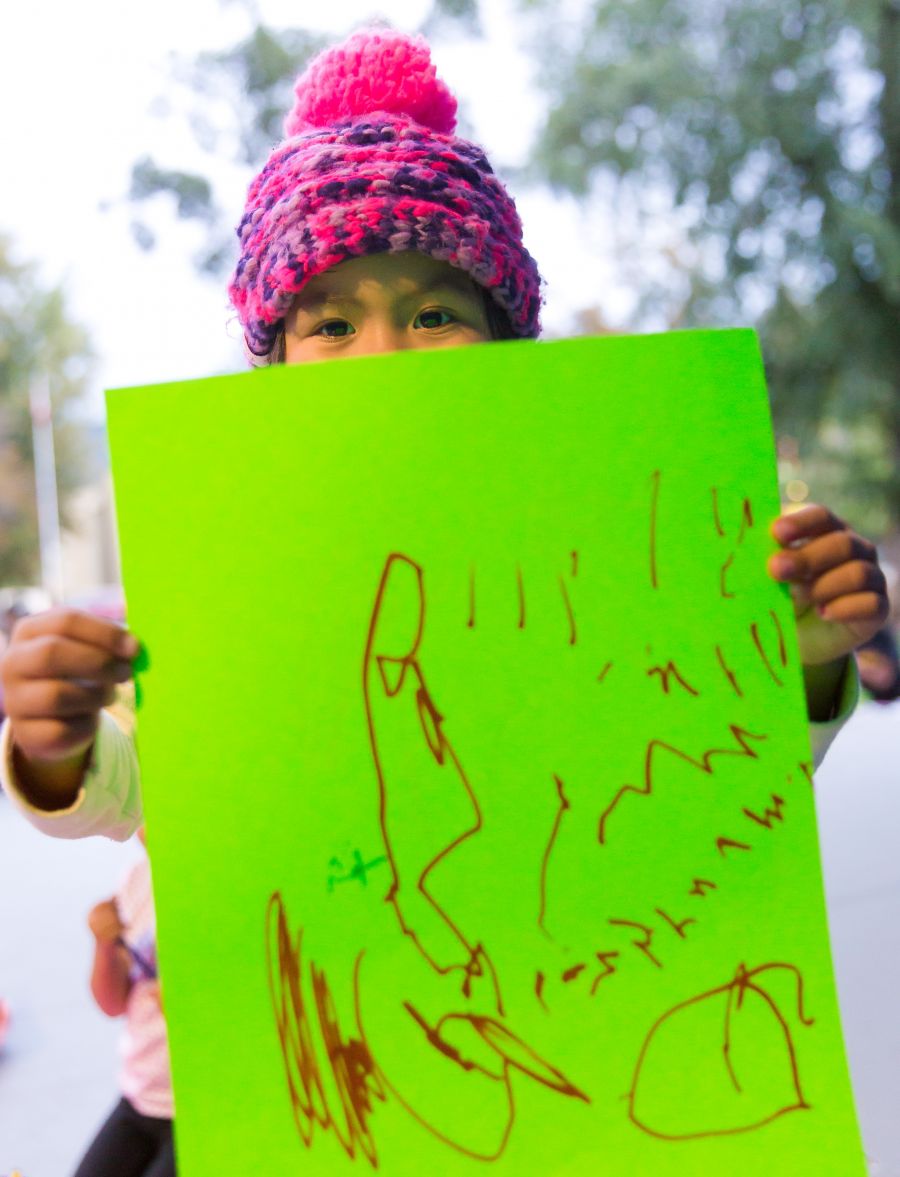 By 7:10, the signs had been drawn and the drumbeat had started. Said Testawich, "We're marching tonight to the Penticton Indian Band drum group. The drumming represents the mother's heartbeat."

Soon the group was headed up Main Street, singing and drumming. And occasionally laughing too. All in the name of change. 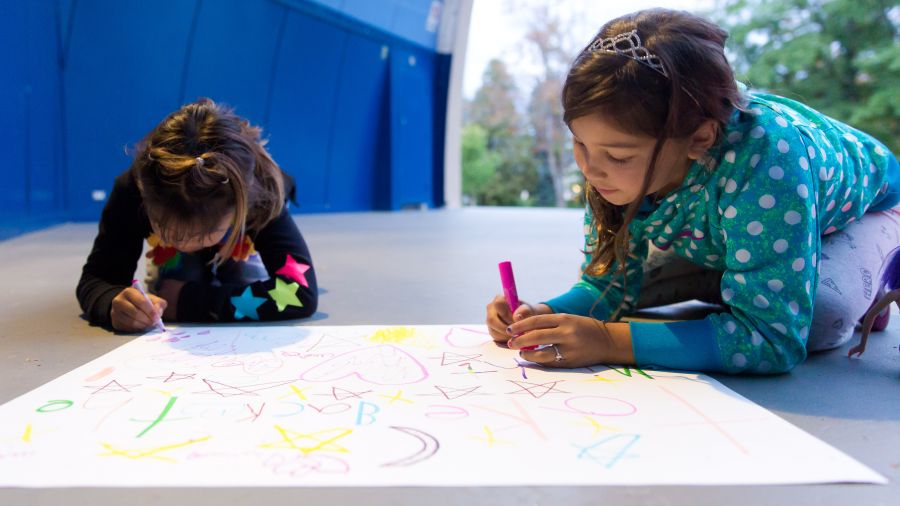 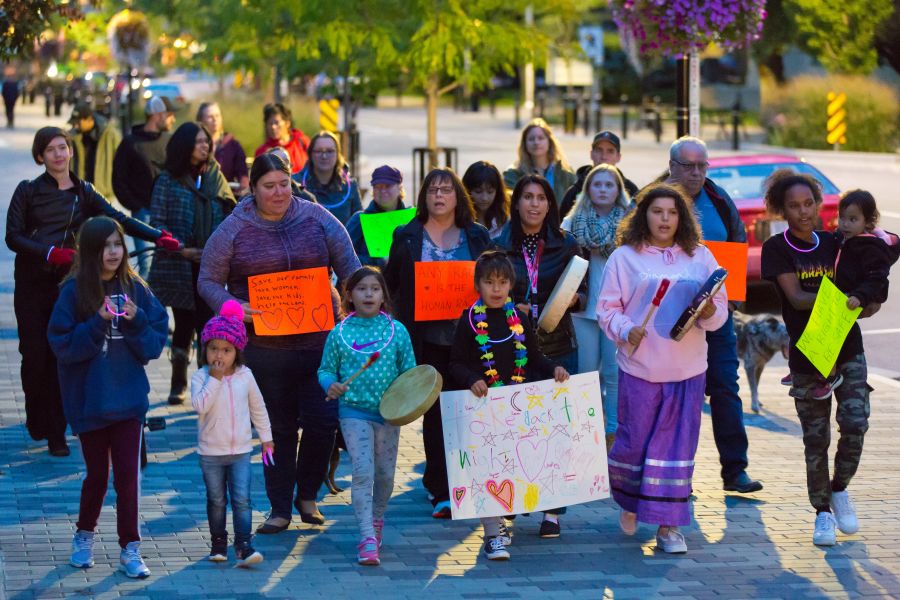