A young BC driver was hit with a plethora of violations and tickets after a speedy trip in Guildford this week.

According to Surrey RCMP, on Sunday, officers conducted a traffic stop when they saw a vehicle excessively speeding. Cops clocked a driver travelling 108 km/h in the area of 96 Avenue and 166 Street, which is a 60 km/h zone.

As police investigated the vehicle, they noticed items consistent with illicit drug possession and arrested the driver. 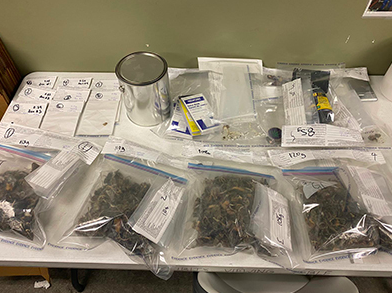 Further investigation resulted in the seizure of 451 grams of psilocybin or "magic mushrooms," two small bags of marijuana, and numerous other drug trafficking items.

The driver of the vehicle was given an immediate driving prohibition and their vehicle was impounded for seven days. They were also issued violation tickets for excessive speeding, not providing a license and failing to display an "N."

Charges have not yet been laid in relation to drug possession. The driver was released at the scene.

"Targeted speed enforcement has an immediate impact on road safety in our community by stopping dangerous drivers in their tracks," said Cpl Joanie Sidhu. "The true magic results are when officers are also able to take illicit drugs off our streets."

For those wondering, fines for excessive speeding can go up to $483, plus all costs associated with a seven-day vehicle impoundment. The length of impoundments increases every time you receive a new offense.