UPDATE: The Sea to Sky Gondola will reopen in a month

They'll be attached to the tourist attraction's new main haul rope, which has already been put in place after arriving from Switzerland in the fall.

As a result, the popular gondola located off the Sea to Sky Highway will be able to open on Feb. 14, just in time for Family Day.

"Our industry partners were there every step of the way, from assisting in the clean-up and assessing needs to delivering major components with absolutely no notice," said Kirby Brown, the gondola's GM, who acknowledge it was a massive task.

"Our amazing team rose to the challenge and have done everything required to get us back up and running as quickly as possible so we can get back to connecting people with nature and the beauty of Squamish.”

The final safety inspections and certifications are scheduled to be done by Technical Safety BC in the first week of February.

It will mean the end of a long journey to repair and reopen the gondola, which was virtually destroyed thanks to an unbelievable act of vandalism on Aug. 10, 2019.

“The fact that the main haul cable was completely severed was, and still is, shocking, and the investigation with the RCMP is ongoing," said Brown.

"However, we want our guests to know they can travel to the summit on the Sea to Sky Gondola with complete confidence."

To thanks guests for their patience, all lift tickets will be 50% off for the entire Family Day long weekend.

The 120-tonne cable arrived early and the work to install it will begin next week, with the attraction still on track to reopen to the public in the spring. 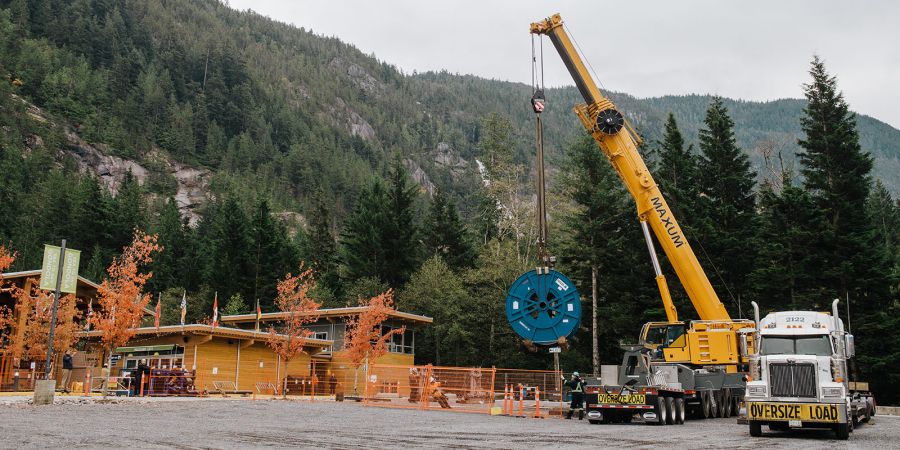 "Experts are coming in from around the world to assist with the install," says a statement from the Sea to Sky Gondola website.

"Prior to the cable arriving and as part of the rebuild, we have added new security measures to the operation."

The criminal investigation into the cable being cut is ongoing, but there's been no recent news regarding it from the RCMP.

(UPDATE: Sept. 13 @ 2:40 pm) - Progress is being made on the difficult task of cleaning up and rebuilding the Sea to Sky Gondola.

All of the cabins have been removed, as have pieces of the damaged cable, and crews have secured the main cable.

The new main cable will be delivered from Europe in October and new cabins will follow shortly after.

"The team is continuing work under the gondola and the area is still considered a construction zone," said a release from the Sea to Sky Gondola website.

"For everyone’s safety, the upper trails including Sea to Summit remain closed at this time."

ES Media produced a two-minute video documenting some of the hard work crews have been doing to clean up the sizable mess.

Gondola Rebuild September 2019 from Sea to Sky Gondola on Vimeo.

A popular tourist attraction along the Sea to Sky Highway, the gondola has been closed since the main cable was cut and 18 to 20 gondolas came crashing to the ground in the early hours of Aug. 10.

On Aug. 23, police confirmed what they originally were suspicious of, that the incident was criminal in nature.

To this point, there's been no public word on any suspects or leads beyond that.

Squamish RCMP have confirmed the preliminary assessment and that there's no other natural or mechanical reasons for the cable to fail.

There's been no word on whether the RCMP have any suspects or leads at this point.

Anyone with information regarding the crime is asked to call the RCMP's dedicated tip line at 604-892-6122.

You can also report tips anonymously to Crime Stoppers at 1-800-222-TIPS.

A detailed review of all the damage from Saturday's shocking incident that brought the gondola's main cable and 18 to 20 cabins to the ground has been completed.

Now, the lengthy process of repairing and eventually reopening the attraction gets underway, which begins with a replacement cable and new cabins that have been ordered from Europe.

"The orders have been placed and we are currently estimating that we will be reopening early next spring," says a written statement from operators.

"This is longer than any of us had hoped but we have to live with the reality of the situation and move forward responsibly."

Hikers are asked to stay away from Sea to Sky Gondola trails during the clean-up phase.

(UPDATE: Aug. 13 @ 7 am) - The criminal investigation into the Sea to Sky Gondola cable being cut continues in Squamish, but it'll be a long time before the popular tourist attraction reopens to the public.

In a statement released on Monday, the gondola's operator said 18 to 20 of the 30 gondola cabins will need to be replaced, along with the main cable.

Thank you to those who have been sending notes of support. It’s truly appreciated by the entire Sea to Sky Gondola family. We are grateful for our incredible community and industry as a whole during this time.

Unsurprisingly, this won't be cheap and the cost of repairing the damaged gondola will be "into the millions."

"We are thankful that no guests or staff were on the gondola and no injuries were sustained in the incident," the statement said.

"Our efforts are focused on the well-being of our incredible team, working with the RCMP and determining steps towards reopening."

For now, representatives of the attraction are contacting all of the private weddings and events that have been scheduled at the gondola and will try to relocate them to other "beautiful venues in the area."

Operators were alerted of the gondola's main cable falling around 4:30 am, about half an hour after witnesses who were camping in the area report hearing loud crashing and banging noises.

Later in the day, the RCMP said that it appeared as if the cable was cut and that the incident would be treated as criminal in nature.

(UPDATE: 4 pm on Aug. 10) - Mounties have said it appears a Sea to Sky Gondola cable was cut and are treating the incident as criminal after gondola cars crashed to the ground early this morning.

They said that "until such time as a cause has been definitely identified", they are considering the shocking case to be a crime.

"We recognize the potential of what could have been and are thankful that no one was injured," Cst Ashley MacKay said.

"We are currently assessing the damage, but our preliminary assessment suggests that a cable was cut.

"We will continue our investigation and release updates to you as soon as possible."

Officers are currently working at the scene with Technical Safety BC and manufacturers Doppelmayr.

They are trying to walk along the gondola line to properly inspect it.

Mounties added: "At this time, the RCMP is asking for anyone with information or anyone that was in the area at the time to please come forward. That includes hikers, climbers and campers who were in the areas of the Sea to Sky Gondola as well as the Stawamus Chief Provincial Park between 4 am and 9 am this morning."

(UPDATE: 2 pm on Aug. 10) - The Squamish RCMP has asked that people stay away from the Sea to Sky Gondola after a haul rope fell and rendered the lift inoperable.

Mounties confirmed the gondola was not in operation at the time and that nobody was injured. 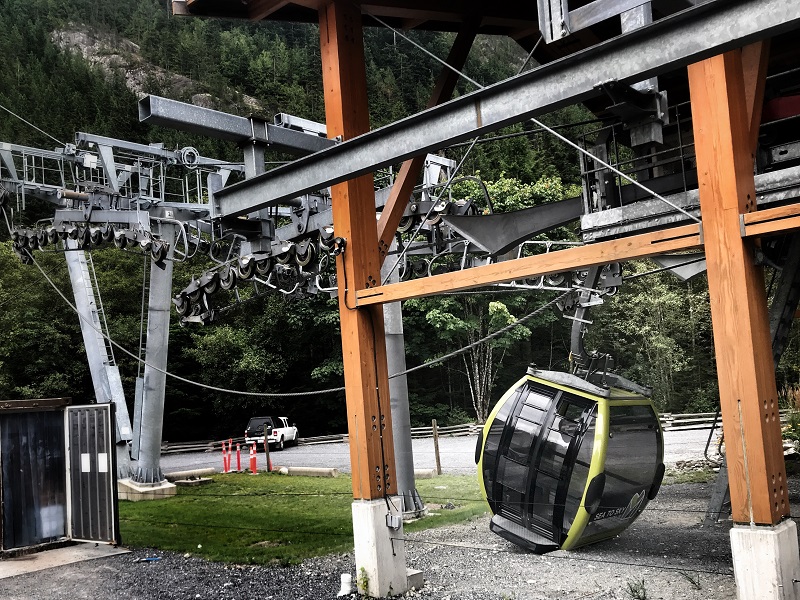 "Our investigation is in the preliminary stages and the cause is undetermined. Right now we are looking at all possibilities which includes those criminal in nature," said Cst Ashley MacKay.

The RCMP is working alongside the Sea to Sky Gondola as well as Work Safe BC and Technical Safety BC. 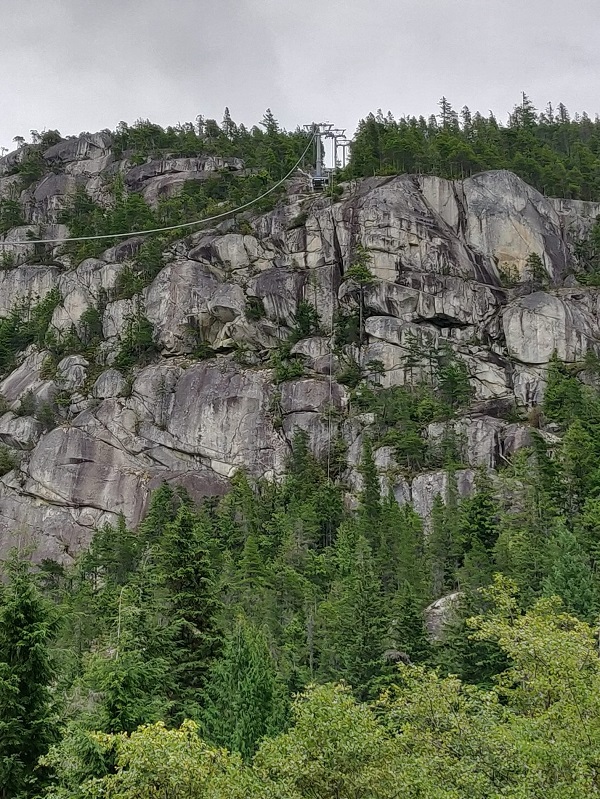 (Original story: 9:45 am on Aug. 10) - The Sea to Sky Gondola will be closed “for the foreseeable future due to a major lift incident.”

That’s the message on the gondola’s website following an overnight cable collapse that sent multiple gondola cabins crashing to the ground. 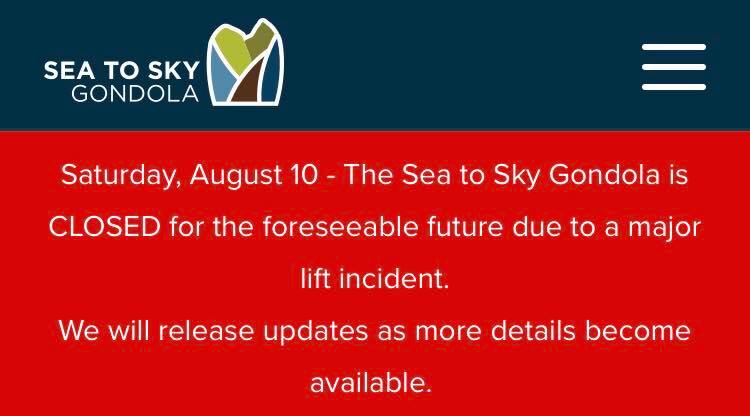 A local search and rescue member said he was told about the incident by a friend who was camping at the Chief campground.

He shared these details and a photo to Twitter:

Photo of the broken cable at the gondola pic.twitter.com/3LFdFNNWwh

“At 4 am, we heard what sounded like a massive rock fall. This morning, we can see a cable from between the first tower and base laying (on) the ground. All those cabins are in the ground.”

His friend has told him a helicopter is now on scene as the situation is being assessed, but the common thought right now is that it’s lucky this didn’t happen a few hours later.

Photos of cars on the ground and detached cables from the sea to sky gondola's overnight collapse #squamish #gondola #seatoskygondola pic.twitter.com/oQlaUBhGvx

“Holy crap. I was planning on taking my parents up there today,” tweeted @JoelSweet. “(Imagine) what would have happened (in the) middle of the day on an August weekend?”

Squamish RCMP confirmed no one was injured during the collapse, but there's "significant damage."

At approx 4:30am we received an alert that the haul rope for Sea to Sky Gondola had fallen and the lift inoperable. No guests or staff were on the gondola and no injuries were sustained in the incident. The gondola is currently closed. More updates as they become available.

NowMedia will update this story as more information becomes available.