A woman who clung to a tree and whose husband saw a "wall of water rushing toward them" as they fled a torrent released from a North Vancouver dam are suing Metro Vancouver's regional district for negligence.

The notice of civil claim filed by Chihiro Nakamura nearly two years after the incident says she and her husband were sitting on a rock in a shallow part of the Capilano River below the Cleveland Dam when they heard a rushing sound.

The BC Supreme Court lawsuit says there had been no warning on Oct. 1, 2020, when water from the 91-metre dam came pouring down the canyon, rising rapidly by nearly 3.6 metres and killing two fishermen downstream.

Nakamura slipped and fell getting off the rock and became separated from her husband, who made it to shore, her lawsuit says.

The claim filed this month says she managed to cling to a tree hanging over the river, and was forced to climb higher as the water rose around her. 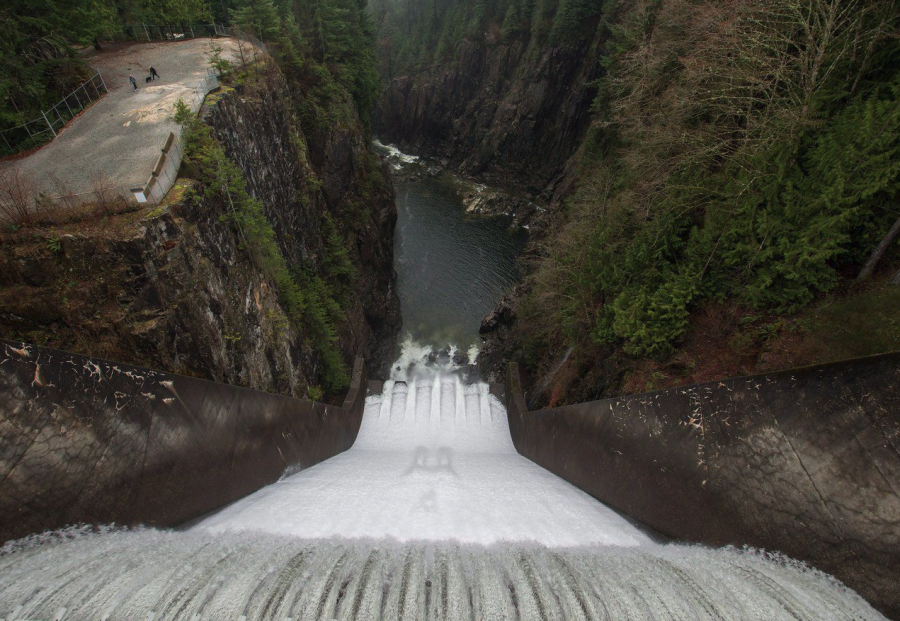 "In the interval of about 30 minutes while (her) husband frantically made a number of attempts running back and forth to get help, (Nakamura) was left alone in the midst of the swirling and rising waters and she thought she was going to die."

She was rescued by firefighters when the waters began to subside, the claim says.

A separate legal action filed by her husband, Mateusz Wiacek, says he initially didn't notice that Nakamura had fallen into the water behind him. When he reached the shore, he tried to rescue her by extending a piece of wood, but the current "pulled it violently away from him." He then ran through the forest to call 911.

Wiacek's claim says he suffered nervous shock, abrasions and post-traumatic stress disorder as a result of the incident.

The claim from Nakamura says she also suffered physical injuries as well as nervous shock and post-traumatic stress disorder.

Both lawsuits ask the court to grant the couple damages for pain and suffering, sleeplessness and fatigue, loss of income, loss of earning capacity and other alleged losses, such as the cost of medical care. The claims do not include a specific dollar figure.

A statement from the commissioner of the regional district, Jerry Dobrovolny, says Metro Vancouver began an "urgent and comprehensive review" after the release, looking at programming, operations, and internal protocols at the site.

A public alarm system was installed in May 2021.

Dobrovolny said shortly after the incident that a gate controlling the flow of water had come down too quickly during maintenance work on the dam, and the district's preliminary investigation found human error was the clearest factor.

Metro Vancouver takes full responsibility for the mistake, he said at the time.

The district dismissed three employees after the incident.

The couple's lawsuits say the release was the result of negligence, and the regional district failed to ensure a warning system was in place should water levels rise unexpectedly due to any mishap or malfunction with the dam.

The district further failed to properly train and supervise employees working on the dam to ensure the safety of visitors to the area, the claims say.

They say the district failed to "heed the warnings of dangers from earlier failures in the operation of the dam endangering visitors."

"Over the past two years, we have had no direct contact from the couple other than receiving their claims this past Friday, and they have made no prior attempts to work with us or notify us about their experience," it says.

The district has consulted with the public and stakeholders to learn about their experiences along the river, while studying its hydrology and conducting surveys to determine patterns of public use to inform long-term public safety enhancements, the statement adds.

The lawsuits also name the Greater Vancouver Water District, a subsidiary managed by the regional district, as a defendant.